‘21 Great Reasons To Keep Marriage As Is’ Released

February 11, 2013 at 6:44 am
Warning: Use of undefined constant post - assumed 'post' (this will throw an Error in a future version of PHP) in /home/customer/www/protectmarriage.org.nz/public_html/wp-content/themes/theme1231/single.php on line 10
|  Category: Media Releases  |
Comments are closed

Media Release 11 Feb 2013
The Protect Marriage campaign has released “21 Great Reasons To Keep Marriage As Is” and an accompanying “21 More MP’s Needed” to inform and empower those who are opposed to the same-sex marriage bill.

“It is quite evident that as this debate has unfolded, the support for redefining marriage has steadily dropped. This resource will help strengthen the resolve of those wanting to maintain the current definition of marriage as one man one woman,” says Bob McCoskrie, National Director of Family First NZ.

100,000 pamphlets have already been printed and are being distributed, and it is expected that another print-run may need to be done.

“In 2004, the government introduced Civil Unions and changed over 150 pieces of legislation to provide legal recognition and protection for same-sex relationships in New Zealand. There is currently no discrimination in the law against same-sex couples. Why do we now need to provide special rights?” asks Mr McCoskrie.

The resource also identifies politicians who have voted inconsistently on the issue when compared with their votes on the civil unions and definition of marriage bills which were previously before Parliament, and other politicians who may consider changing their vote. 21 more MP’s are needed to vote against the bill in order to defeat it at either the 2nd or 3rd Reading.

“It is perfectly possible to support marriage as currently defined while also recognising and respecting the rights of others. Changing the law so that marriage includes same-sex unions would be a massive change to what marriage means. This debate is not about homosexuality or discrimination – it is simply about the definition of marriage. Equality respects difference – it doesn’t destroy it,” says Mr McCoskrie.

“The author of the bill, Labour MP Louisa Wall, has promised that her bill would not require any person or church to carry out a marriage if it does not fit with their personal beliefs. This assurance is now being seriously questioned by legal experts.”

“There is also real concern with the speed with which this bill is being rammed through without considering alternative options and potential consequences. The issues dealt with by this bill are complex in a constitutional, cultural and social sense, and these simply haven’t been afforded the appropriate time to debate. The fact that 20,000-plus submissions have been made shows the magnitude – and also the divisiveness – of this bill,” says Mr McCoskrie.

“We rush the process of changing the law around marriage at our peril.”
ENDS 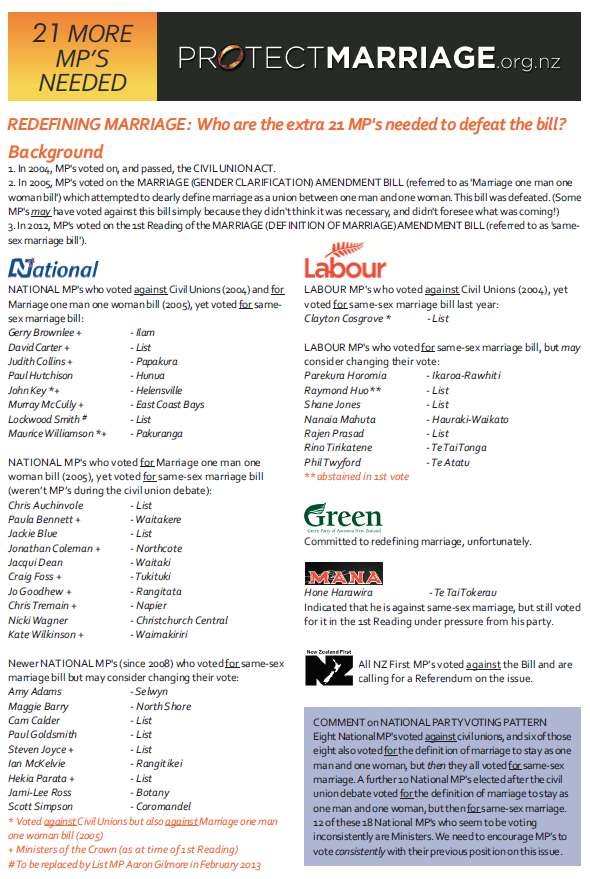 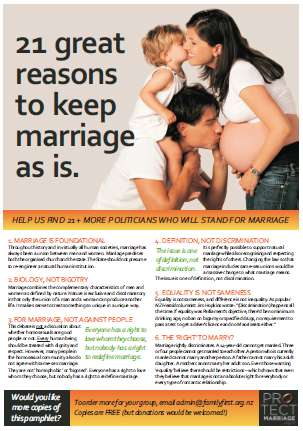