August 23, 2017 at 1:42 pm
Warning: Use of undefined constant post - assumed 'post' (this will throw an Error in a future version of PHP) in /home/customer/www/protectmarriage.org.nz/public_html/wp-content/themes/theme1231/single.php on line 10
|  Category: Latest News  |
Comments are closed 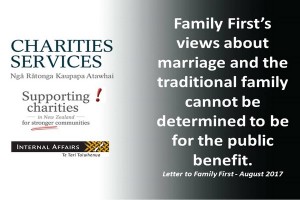 WE’VE BEEN HERE BEFORE.

We haven’t been deregistered just yet! The media have misinterpreted the impact of the decision by the Charities Board to deregister Family First. They were quick to broadcast the news that we have been ‘stripped’ of our charitable status. The truth is that this is the intention of the Charities Board.

But they had the same intention in 2015 – and thanks to your support – they failed. And we need to help them ‘fail’ again.

To do that, we will be lodging papers this week in the Wellington High Court to stop them – again. The deregistration is not effective until 18 September, but under the Charities Act 2005 (ironically section 59), we can halt the process and lodge an Appeal with the Registrar of the High Court. And that’s exactly where we’re heading. So until the court rules on this issue, and for as long as we fight the issue – which we will ‘all the way’ because of the greater issue at stake of freedom of speech & belief and the role of marriage & family in NZ – then Family First is still a charitable organisation.

You and I can ‘put a spoke’ in their agenda.

As board member Bruce Logan wrote in May,

…It is unlikely that Family First will ever find itself defending any issue of greater importance. Deregistration would be a legal victory for those ideologues who would take power away from the family and give it to the state…. Deregistration is a critical issue, but it is not the most significant. The desire for deregistration has its origin in an ideology that redefines the family…

Please take a moment to read his full article by clicking the link below in order to understand what’s really at stake.

Thanks so much for your messages of support and the gifts already made to our Fighting Fund.

The freedom to speak about, believe in, and promote marriage and family is worth the fight.

LISTEN – Bob McCoskrie debates the issue on Radio NZ’s “The Panel”
MORE INFO about the Charities Registration Board
https://www.charities.govt.nz/about-charities-services/charities-registration-board/
TELL the Charities Board what you think mailto:[email protected]