March 5, 2013 at 10:00 am
Warning: Use of undefined constant post - assumed 'post' (this will throw an Error in a future version of PHP) in /home/customer/www/protectmarriage.org.nz/public_html/wp-content/themes/theme1231/single.php on line 10
|  Category: Media Releases  |
Comments are closed

Media Release 5 March 2013
Family First NZ has produced evidence that the Select Committee considering the same-sex marriage bill have rushed the process, and in the process ignored possibly thousands of submitters who wanted to make oral submissions on the bill.

Family First also disputes the number of submissions considered ‘form submissions’. However, the committee will not front up and disclose how they determined ‘form’ submissions from ‘unique’ submissions.

“Other Members’ bills are not being rammed through at such speed. Some of these bills are being considered by the same Select Committee. The Parental Leave and Employment Protection (Six Months’ Paid Leave) Amendment Bill was introduced a month before the same-sex marriage bill, and yet the Select Committee report is not due until August 2013. The Lobbying Disclosure Bill also had its first reading a month before the same-sex marriage bill, yet the report is not due until the end of July. The Members of Parliament (Remuneration and Services) Bill – a government bill also being considered by the Government Administration Select Committee – has 12 months for the Select Committee to consider,” says Bob McCoskrie, National Director of Family First NZ.

“Yet the same-sex marriage bill has just six months to consider 21,500-plus submissions, hear oral submissions, and report back. In a healthy democracy, the people are entitled to speak and deserve to be heard in full. It should not be rushed, and democracy should not be denied, just because of a pre-determined reporting date which fails to recognise the weight of the issue. This bill proposes a major change to an important human institution and foundation of our society,” says Mr McCoskrie.

“This is a cynical attempt by politicians to ram through a highly controversial law change without due consideration.” 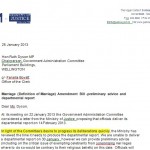