Family First To Charities Board – See You Back In Court

August 21, 2017 at 1:37 pm
Warning: Use of undefined constant post - assumed 'post' (this will throw an Error in a future version of PHP) in /home/customer/www/protectmarriage.org.nz/public_html/wp-content/themes/theme1231/single.php on line 10
|  Category: Media Releases  |
Comments are closed 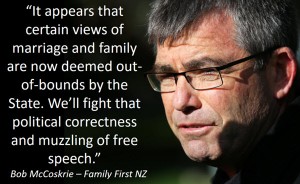 Media Release – 21 August 2017
Family First NZ has instructed its lawyer to file an immediate Notice of Appeal in the Wellington High Court against the Charities Board’s formal decision to deregister Family First NZ.

Family First is going back to the same court to challenge again the belief of the Trust Board that our views about marriage and the traditional family “cannot be determined to be for the public benefit in a way previously accepted as charitable”.

“This is a less-than-satisfactory procedure of trudging back to the same court. It seems that the Charities Board are simply hoping for a different judge and a more favourable decision. It is a highly politicised and inconsistent decision by the Board and will have a chilling effect for many not-for-profit charitable groups – both registered, deregistered and wanting to be registered – who advocate for causes, beliefs, and on behalf of their supporters, and often have to engage in advocacy at a political level, not always through choice but through necessity,” says Bob McCoskrie, National Director of Family First NZ.

Justice Collins in the earlier decision in the Wellington High Court in 2015 recognised the strength of Family First’s argument that its advocacy for the concept “…of the traditional family is analogous to organisations that have advocated for the ‘mental and moral improvement’ of society.…” The Charities Board was also scolded by Justice Collins who said “…Members of the Charities Board may personally disagree with the views of Family First, but at the same time recognise there is a legitimate analogy between its role and those organisations that have been recognised as charities.”

“It appears that certain views of marriage and family are now deemed out-of-bounds by the State. We’ll fight that political correctness and muzzling of free speech,” says Mr McCoskrie.

“Family First will appeal this decision as far as we need to, not because we have to have charitable status to exist, but because of the threat it places on other charities and their freedom to speak and advocate on behalf of their supporters in a civil society.”
ENDS