The Next Three Years..

September 22, 2014 at 2:13 pm
Warning: Use of undefined constant post - assumed 'post' (this will throw an Error in a future version of PHP) in /home/customer/www/protectmarriage.org.nz/public_html/wp-content/themes/theme1231/single.php on line 10
|  Category: Latest News  |
Comments are closed 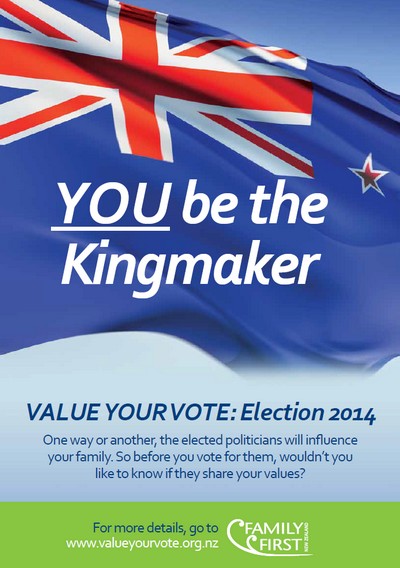 The votes have been counted and the winners have celebrated. And we got some great feedback from our Value Your Vote election resource..

My daughter turned 18 on Thursday so has only just become eligible to vote. Although they had some exposure to issues and candidates at school in the lead up to the election she has looked at your You be the kingmaker resource several times. She has just left to pick up some friends so they can cast their first votes together and what did she take with her? Your YBTK booklet. She is quite private so I’m not sure which way she will vote but what you put out has seemed to be the resource she has most strongly based her vote on and what she is sharing with her friends as they all weigh up how to vote. The booklet has certainly helped me to decide which way to vote.

I have been wading through things trying to find someone to vote for and almost at the end of my tether debating if I should bother to vote at all – and then I received (your) email! In a matter of minutes you have cleared up the whole state of confusion and I am now 100% on who to choose. I will be there tomorrow to vote (in advance as I am travelling this weekend). I have been chatting to my husband and he also agrees just how clear you have made it – he will also be voting now. Thanks again

Hello, I don’t think I agree with you on most issues, but just did want to let you know that I appreciate your Value Your Vote 2014 pamphlet, which I got when I attended a political forum today. It is very helpful to have a chart that compares the different parties’ stands on the issues. It was very informative and I learned a lot I didn’t know about the parties from it.

So what are the family issues that are going to be on the agenda for the next three years. Here’s our prediction….

* EUTHANASIA – One of the positives from the weekend was the failure of Labour MP Maryan Street to make it back in to Parliament. She had made it clear that she would re-introduce her Euthanasia bill after the election. We will be watching to see if any other Labour or Green MP takes up the issue. We believe it is highly unlikely that either NZ First or National will push the issue.

* ABORTION – The Greens are keen to decriminalise abortion and remove any safeguards for women that may be in place. It’s our view that this policy which we worked hard to warn people about was a major reason for their poor election result. Labour will attempt to use the Law Commission to push the issue. It’s unclear whether National will resist this. But we’re ready. You can view our website chooselife.org.nz with lots of resources and research available to help you debate the issue with knowledge and clarity.

* MARIJUANA – Once again the Greens will try to push for decriminalisation, and other politicians (aided by the media) will try and push the medicinal marijuana aspect. In response, we’ll be launching our website saynopetodope.org.nz A weak-kneed approach to marijuana use will simply send all the wrong messages that small amounts of drug use or dealing or growing aren’t that big a deal – the completely wrong message, especially for younger people and families. Opium has medical value, and it is called morphine. Marijuana has medical value, too — but just as we don’t smoke opium to receive beneficial effects, we need not smoke marijuana to get its medical value.

* ADOPTION – Green MP Kevin Hague (who received just 6% of the vote in his electorate – less than the Ban1080 candidate!) wants to completely revamp adoption laws – not because it’s broken, but because they want to allow anybody to adopt, including same-sex couples who are just living together. And as with the same-sex marriage debate, politicians are likely to wilt under the intense pressure and labels that are targeted at them. We’ll aim to give them some backbone. Children deserve a mum and a dad. Nature highlights the complementarity of male and female. While a compassionate and caring society always comes to the aid of motherless and fatherless families, a wise and loving society never intentionally creates fatherless or motherless families. We’ll be launching our website mumanddadmatter.org.nz

* GENDER CONFUSION – Despite MP David Shearer saying that Labour suffered because it has been ‘hijacked by special interest groups’, Labour’s Louisa Wall will attempt again to make ‘gender identity’ as a prohibited ground of discrimination under the Human Rights Act. This has been dubbed the “bathroom bill” in overseas jurisdictions because of experiences where it gives the opportunity for men who pretend to be transgender a legal alibi to use women’s bathrooms, showers, and changing rooms at public facilities and more worryingly, at schools! Family First has already lobbied to remove this proposal. We’ll be ready again. Both the Greens and Labour are keen to politicise schools to advance their sexual agenda – including in the ‘sexuality education’ area.

* MARRIAGE & FREEDOM OF CONSCIENCE – The real outcomes of the redefinition of marriage are yet to come to fruition – namely, attempts to further implement ‘marriage equality’ to allow polygamy and group marriage, and the right to freedom of conscience for celebrants, venues, and service providers being threatened as is happening at an increasing rate in overseas jurisdictions. See protectmarriage.org.nz

* EASTER TRADING – The liberalisation of Easter trading laws is expected to raise its head again.

* FIXING THE ANTI-SMACKING LAW – NZ First has a specific policy of amending the law, and perhaps National MP’s will finally acknowledge the evidence that the law is targeting good parents and doing nothing to tackle child abuse. We’ll keep highlighting the harm that this law is doing.

* POVERTY – We’ll be writing more about this issue, but ‘child poverty’ completely misses the point. The ‘elephants in the room’ include poverty of spirit, poverty of family stability, and poverty of good decision making. Welfare plays a vital role in giving people a ‘hand up’, but the breakdown in family and decreasing marriage rates continue to drive our poverty rates and our increasing rates of family violence.

* DRINKING AGE / ALCOHOL HARM – Unfortunately the National government has shown little will to deal with the obvious harms of alcohol abuse and the solutions put forward by the Law Commission after consulting extensively with the public.

* RESIDENTIAL BROTHELS AND STREET PROSTITUTION – There is currently a bill before Parliament banning street prostitution – although it has stalled and needs to be kick-started. The problem of residential brothels continues to harm families around the country. Unfortunately NZ First lost a superb MP Asenati Lole-Taylor who had done some excellent work on this issue. And Labour MP Ross Robertson who was pushing the issue has also retired.

* AND PLENTY MORE – such as income splitting, surrogacy and stem-cell research, broadcasting standards, sexualisation of children in the media, pokie machines, loan sharks, and more!

How YOU can help..
If you have expertise in any of these areas or real-life experience, we’d love to hear from you. Please contact us at [email protected] In fact, any expertise in any area is always welcome 🙂

Please also consider supporting our work so that we can keep on doing what we’ve been doing. We still have a $17,000 shortfall from our Value Your Vote resource – plus we need to prepare for the next three years.

Most importantly, stay in touch with our newsletters so that we can keep you informed and empowered to speak up on family issues.

Please be reassured – we will continue to be a watchdog for you and your family.

forward to a friend