August 12, 2014 at 11:14 am
Warning: Use of undefined constant post - assumed 'post' (this will throw an Error in a future version of PHP) in /home/customer/www/protectmarriage.org.nz/public_html/wp-content/themes/theme1231/single.php on line 10
|  Category: Latest News  |
Comments are closed

Public Discourse 11 August 2014
As mainline Protestant denominations increasingly accept the ordination of gay clergy and publicly affirm same-sex unions, the sociologist in me wishes to understand what this development means for people in those denominations. I’m not talking about subtle linguistic shifts. While the difference between speaking of marriage as a “civil contract between a woman and a man” and as “a unique commitment between two people” is obvious to those who pay attention to church documents, the impact of such changes on congregants’ attitudes and internalized paradigms—their hearts, I suppose—is seldom considered.

What is the sexual and relational morality of Christians who accept the moral legitimacy of same-sex marriages? Some questions naturally arise. Does adultery mean the same thing for both same-sex and opposite-sex unions? Does it make sense to speak of premarital sex in such a context? Historically, the fear of pregnancy was enough to scare many love-struck Christians into taking things slow, but same-sex pregnancies are an accomplishment, not an accident, and most Christians use contraception now anyway. 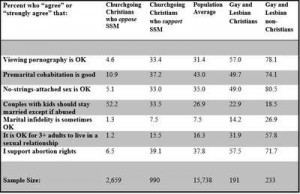 The Relationships in America Survey

To do this, I rely on the Relationships in America survey, a data collection project I oversaw that interviewed 15,738 Americans, ages 18-60, in early 2014. It’s a population-based sample, meaning that its results are nationally representative. The survey asked respondents to indicate their level of agreement or disagreement with these seven statements:

1. Viewing pornographic material is OK.
2. It is a good idea for couples considering marriage to live together in order to decide whether or not they get along well enough to be married to one another.
3. It is OK for two people to get together for sex and not necessarily expect anything further.
4. If a couple has children, they should stay married unless there is physical or emotional abuse.
5. It is sometimes permissible for a married person to have sex with someone other than his/her spouse.
6. It is OK for three or more consenting adults to live together in a sexual/romantic relationship.
7. I support abortion rights.
http://www.thepublicdiscourse.com/2014/08/13667/?utm_source=The+Witherspoon+Institute&utm_campaign=6a7647fbde-RSS_EMAIL_CAMPAIGN&utm_medium=email&utm_term=0_15ce6af37b-6a7647fbde-84094405