World minimum marriage age: Chart shows the lowest age you can legally get married around the world

July 26, 2015 at 1:59 pm
Warning: Use of undefined constant post - assumed 'post' (this will throw an Error in a future version of PHP) in /home/customer/www/protectmarriage.org.nz/public_html/wp-content/themes/theme1231/single.php on line 10
|  Category: Latest News  |
Comments are closed

The Independent 26 July 2015
On Friday, the Spanish government announced it was to raise the marriage age from 14 to 16 to bring it into line with the rest of Europe.

Estonia now has the lowest marriage age in Europe with teenagers able to get hitched at 15 with parental approval.

Globally, the average legal age of marriage for boys is 17 and 16 for girls but many countries permit them, particularly girls, to marry much younger.

Several places, including the state of Massachusetts in the United States, allow girls as young as 12 to get married in “exceptional circumstances” with the consent of a judge. 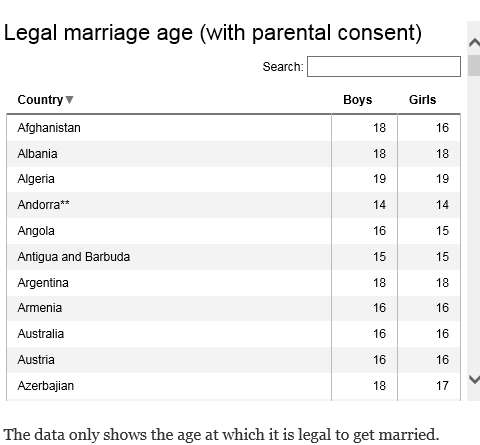 But in many cases this is a leftover from an earlier age and is rarely tested. Many countries with low marriage ages do not have a particularly high number of under 18s getting married.

Other countries only permit marriage among the young for certain groups. For instance, according to the US state department’s humans right report on Trindad & Tobago from 2014, though the official marital age is 18 for men and women, Muslims and Hindus have a separate Marriage Act.
http://www.independent.co.uk/news/world/the-lowest-age-you-can-legally-get-married-around-the-world-10415517.html