June 5, 2014 at 11:09 am
Warning: Use of undefined constant post - assumed 'post' (this will throw an Error in a future version of PHP) in /home/customer/www/protectmarriage.org.nz/public_html/wp-content/themes/theme1231/single.php on line 10
|  Category: Media Releases  |
Comments are closed

Media Release 5 June 2014
Family First NZ says that Auckland ratepayers are being made to subsidise an event promoting polyamory for those who want to ‘relate to more than one partner’ and non-monogamous marriages.

The event to be held in Auckland this month received an Auckland Council grant from the Community Development and Safety Committee, and is entitled “Poly Panel, Discussions around Queer Polyamory A one day event exploring a framework of ethical, healthy polyamory relationships.”

“It is incredible that with the dust having only just settled on the same-sex marriage debate, Auckland Council sees fit to fund an event promoting discussion around polyamory and questioning monogamous marriages,” says Bob McCoskrie, National Director of Family First NZ.

“Fringe groups like this should fund themselves – not be funded by ratepayers.”

In the advertising blurb, it states “There has been much queer discussion about maintaining our authentic relationship choices since the recent marriage amendment law. Along with questioning heteronormativity, many LGBTI people question monogamous marriages and relationships… This event hopes to break down some of the isolation and misunderstanding that sometimes surrounds non-monogamous (and polyamorous) relationships.”

“Although it is only a small grant, it is the principle involved. Why is the Auckland Council spending money promoting polyamory? If these groups want to have their gatherings, they should fund themselves – and Council should stick to their core business,” says Bob McCoskrie, National Director of Family First NZ.

“It also begs the question – what other fringe groups are the Council funding while in debt?”

“Councils should stay out of the ‘culture war’ and stick to providing core services which the majority of ratepayers clearly expect them to spend their time doing.”
ENDS 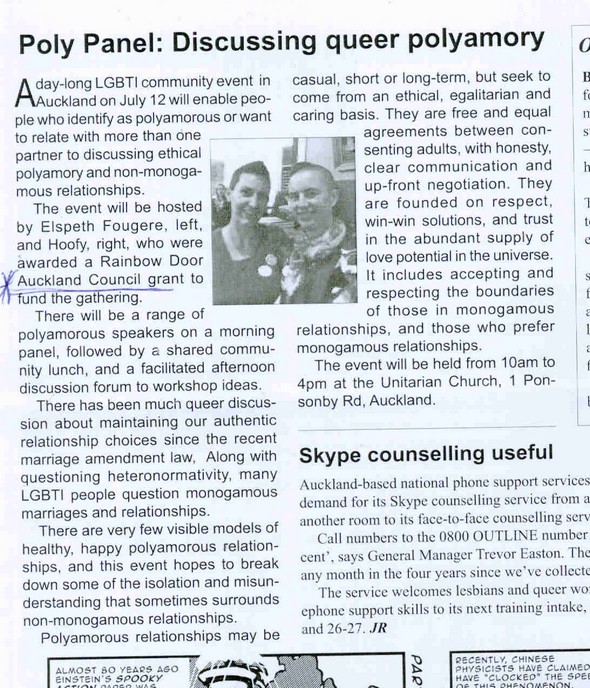