February 15, 2016 at 7:00 pm
Warning: Use of undefined constant post - assumed 'post' (this will throw an Error in a future version of PHP) in /home/customer/www/protectmarriage.org.nz/public_html/wp-content/themes/theme1231/single.php on line 10
|  Category: Media Releases  |
Comments are closed

Auckland couple Jeram and Ganga Ravji will be celebrating their 81st wedding anniversary in two months, and both turn 100 in May and June respectively.

“Although we can only go on the nominations made, we’re pretty sure that the Ravjis are NZ’s longest married couple. As part of their award from Family First NZ, they will have a professional photo sitting with their extended family which includes 6 children, 15 grandchildren and 25 great-grandchildren all living in Auckland. The last family photo was 10 years ago at their 90th birthday celebrations,” says Bob McCoskrie, National Director of Family First NZ.

“The previous longest marriage that we’re aware of in New Zealand is a Christchurch couple who we believe celebrated their 79th wedding anniversary before the husband died in 2013. The current record in the US where the concept originally began is a couple from California who had celebrated 82 years of marriage. Perhaps the Ravjis will break this record!”

“These awards are an opportunity to promote marriage and honour married couples. We want to celebrate with couples who are setting the example for younger married couples just starting out,” says Mr McCoskrie.

Photo below shows Jeram and Ganga Ravji receiving their prizes from Family First NZ which included flowers, chocolates, and a photo sitting valued at $1500. 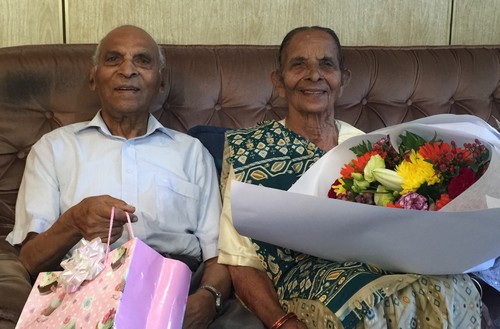 However as was also the tradition they didn’t live together as man and wife until of age and in this case that commenced in April 1935 when they were 19 years old – almost 81 years ago! 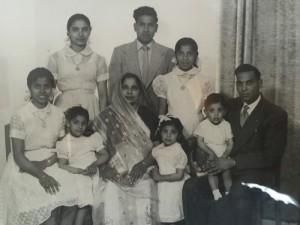 They faced some very tough times in earlier years in India but have been in NZ as a family now since 1953 (63 years), although Mr Ravji first came here in 1928 and then lived here much of the next 20 years trying to make a humble living and returning regularly to India to take a little money back to his family.

At one stage while living in India, he became a part of the ‘Freedom Fighters’ working under Mahatma Ghandi against the rule of the British Government. He had to serve 10 months in prison for his involvement, and his wife was often beaten by the police attempting to get information out of her as to the location of her husband.

They settled in Wanganui where for many years they were highly respected fruit and vegetable retailers. They shifted to Auckland in 1980.

They will both be 100 years old this year in May and June respectively. In April they celebrate their 81st wedding anniversary. Together they have 6 children, and 15 grandchildren and 25 great-grandchildren all living in Auckland. They hope to celebrate their 100 years this year and they’re looking forward to receiving their letter from the Queen. 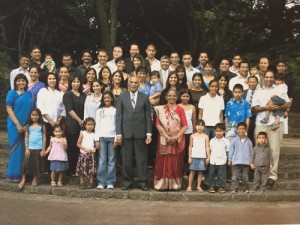 We asked them how to make a strong marriage that lasts. Ganga said that in a long marriage there’s been lots of sacrifices, and she’s concerned that the young ones can’t tolerate anything and can’t make sacrifices. They have learnt to tolerate each other. She said that in every life, God’s given good and the bad and you have to work through it. They’ve had a long life and they’ve always had their ups and downs and it hasn’t been a bed of roses – lots of tragedies – but you have to live with it, and work through it. Their parents instilled in them ‘this is the way to do it and this is what you have to do’, and they listened to their parents – they never questioned them. The parents gave them advice and they just followed it, even if they didn’t like it. They knew that their parents knew better than them and wanted the best for them.
ENDS